Today, three separate “Minecraft moments” happened at school. Rather than reflect on them individually, I thought I’d examine them collectively and see if any new insights came with the grouping.

Have you ever had a student ask to return to a unit of study, or to complete an unfinished assignment? Today, my Grade 2 students in the library asked if or when we would be able to go back to a project we started in the fall. I blogged about it here. It was a relatively simple research project, with the goal of writing a little, virtual, non-fiction book in Minecraft. These books would be placed in the virtual libraries built by our junior division students. I can only surmise that the students are eager to have another opportunity to play and work in a Minecraft environment. Even one of the teachers asked if it would be possible to return to this task so that more students would be able to create a final product.

My current batch of Minecraft Club members are really, really obsessed with PvP. I’m surprised that, week after week, they choose to battle each other. However, when looking closer, I realized that they are actually re-doing their orchestrated fights in very different ways. At first, they used the prescribed PvP Battle Arena. 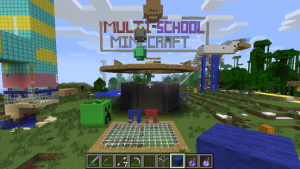 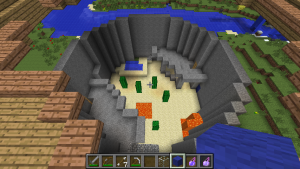 Then, they chose to organize jousting tournaments. They selected a large outdoor space, obtained horses, arranged weapon requirements, and fought each other medieval-style!

After that, they decided on an open-air, hand-to-hand combat challenge, with special holes to hide equipment. At first glance, it looked they were “always just fighting”, but in fact, they were re-doing their fights in new and innovative ways. Take a look at today’s recount from one of our players:

Today I battle lots of people,It started off easy but it became hard because i was challenging. I first battle dersplat and It was really easy and he wanted a rematch but,I gave my self a challenge and it was to use a wooden axe to kill him but i failed to it took really long. I won agents dersplat like 3 or 4 time today because he wanted so many rematch. Then i got really bored of fight him so i wanted a real challenge and i battled cyberslime. Cyberslime was really hard to kill because we all had knock back on our sword so each time i hit him he gets to gain back his health. Me and cyberslime never ended the fight yet because time was up

Back in November, many of my students put themselves on a waiting list, to have the opportunity to beta-read Liam O’Donnell’s soon-to-be-released novel, Nether Nightmare. Writing doesn’t always go according to schedule and the manuscript is ready now, in April. I called the students over the PA to check if any were still interested in reading the book.

A book about Minecraft? You bet they were still interested!

The trick was that April is one of those super-busy times at school. Students are working on projects, rehearsing for school concerts, and committed to other clubs and teams. Our original plan was to do a read-aloud together. Instead, we had to rethink how’d we approach the book. In the end, we differentiated. Several chose to read it independently at home and provide feedback on their own time. Others decided to meet on Thursdays at lunch so that I could read it to them (“with expression, don’t forget”, urged one student who picked this option) and we would do a group review.

I’ve love for readers of this website to comment on any common threads they notice between these three short anecdotes. For me, I guess I’m just impressed with the time and effort players are willing to donate to Minecraft and related activities. I like that some of the traits we’d like to instill, like creativity, perseverance, and problem-solving, seem to come naturally when passion is present. And, it doesn’t seem to get old or stale.