These labels are lenses that I use to see and understand my world. Sometimes these perspectives can narrow my vision.

Case in point: my son and daughter play Minecraft on the Professional Play GamingEdus server. It’s a great environment, but there are times where other players don’t behave in ways I like. Trolling, griefing and insults happen, despite our best efforts to prevent them. Recently, my son was really upset with an incident between a trio of players, including himself. This, combined with the intentional destruction of his house in Survival Mode, set my “Mommy Meter” up to 11. I was livid. I ranted. I sent sternly-worded emails expressing concerns and had loud phone calls with friends about the issue. I was ready to set tooth and claw on anyone who dared mess with my son. A couple of hours later, while I was still seething, my son was back playing with the same individuals that had the earlier conflict. I was flabbergasted. Speechless. Shocked and dismayed. How could he even contemplate playing with someone who had wronged him so badly just a short time before? I went to complain to my husband, who simply said, “Our son is a nice kid. And very forgiving.”

As for that decimated home? He went exploring with one of his good virtual friends tonight to find a new spot to build another home in Survival, and spoke to some of our server administrators about putting plug-in protections as extra security. Instead of being self-centred and “dwelling on his dwelling”, he spent time working with other people on different projects and teaching them techniques. 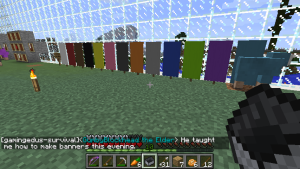 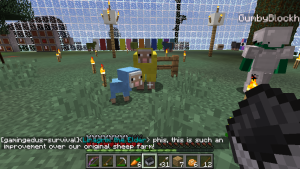 Don’t get me wrong – I’ll still protect my children with the passionate fury of a wild animal, but there are times when it’s important for parents and teachers to wait, take a deep breath, and let our sons, daughters, and students figure out how to solve problems and deal with conflict and disappointment. It’s hard. I’d love to pre-select his friends and weed out the ones that I deem unworthy of my son’s loyalty, but that’s not life. I just need to practice deciding when I need to jump in or step back. In the meantime, we’ll play. Together. Just because.