The Story of R

The kind of evidence that GamingEdus members tend to like the best, to demonstrate how powerful Games Based Learning can be, is anecdotal. We love to tell stories about students and situations. This may disappoint individuals that prefer quantitative data but there is something very primal about sharing a narrative. It’s not fiction – heck, call it a “case study” if you want to sound official – but today’s post is a story about a student I’ll call R.

I was surprised when R volunteered to join the school Minecraft Club in the fall. She was very shy and quiet. I recorded her name and gave her a spot with the Tuesday January February players. She was assigned the Calcagrim account as her online persona.

After the first session, one of R’s friends came up to me, with R next to her, to tell me that R wanted to quit the club. I was surprised. I wanted to find out why. R is an ESL (English as a Second Language) student and doesn’t speak much at all, in English or in Chinese. When I asked the friend why R wanted to quit, she said, “She doesn’t like it.” When I asked what parts she didn’t like, her friend said, “All of it.” Later that day, I asked another teacher, fluent in Mandarin and Cantonese, to ask R in Chinese about her feelings. It turns out that it wasn’t “everything” – R was stressed about the requirement of writing in English on the wiki and knowing what to do in game.

I consulted with the ESL teacher about how to handle the situation. The ESL teacher and I decided to invite a couple of other ESL students into the club, so that she would not be the only ELL (English Language Learner) attending the club at that time. (Many of our students are bilingual but none in this club group used Chinese almost exclusively at school like R does.) I agreed to support her writing by providing easy sentence starters and an older student (my Minecraft tech assistant) who could help her translate her ideas. These new members would be her emotional supports.

The other students joined but R still didn’t know what to do while in game, so I started to play with the trio. At first, all we did was follow each other. It was almost like a game of virtual tag. I’d chase them and they’d run away. Then R found it funny to throw or hit – since we were in creative mode, this was not a big deal, and this was the first instance I’d seen of her trying something on her own.

We played tag and follow the leader for a few sessions, and R started to “loosen up”. She’d peek at my screen to see where I was and who I was following, and she’d laugh and talk excitedly to the other ESL students in Chinese. We would end our club play time 15 minutes early so that we could help R and the other ESL students write their “reports”. R would respond to my Minecraft Tech Aide’s questions about what she did in-game and what she wanted to say, and he would help her write, or write for her.

There were two huge changes in the second month of the club time for R. One afternoon in February, I asked one of the other ESL students if she wanted to make something instead of playing tag. She said yes and told me she wanted to make a house. We found a spot and started to build together. I invited R and the other ESL student to join us. Other things were happening in-game, so I couldn’t stay with them to play. When I checked back on them, they had not only built a big dirt house with a glass roof, there were things inside the house, like a bed and flowers. When I asked who put the items in the house, it turned out to be R!  This was such a milestone, because R took the initiative to check out the inventory and add items she had found.

The second biggest positive change occurred during the second last week of our club time together. Usually, R waited for someone to come to her to help her with her writing. It was a few minutes before the club was due to wrap up, when I turned and saw R still playing. When I asked why she was still playing and not writing, it was because she had already written her five sentences by herself! She got on the wiki on her own and typed her own sentences independently!

I brought the ESL teacher in after school one day to watch her ESL students in action. They were loud, louder than they usually are in school. They didn’t even notice the teacher come in to observe. It was so nice to see R smiling and joking and yelling with her friends. (Another ESL student came to watch them play and chat with them as they used Minecraft, and eventually asked if there were any spots for her to join. When I asked why she didn’t put her name forward before, she said that she didn’t realize that it would be so fun and she thought it was a “boy game”.)

I also noticed that ever since R joined Minecraft Club, she says hi to me in the halls. She never used to do that before.

Here’s some artifacts to help me tell my story: a photo of R playing as Calcagrim near the house she built, and her Minecraft journal, found on http://minecraftclubhub.pbworks.com 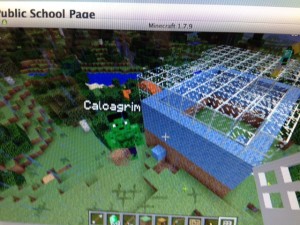 My play minecraft  so happy.

Ms．Maliszewski And I hit and．

I and suzy play minecraft．

I killed a wolf.

I killed it with my hands.

I couldn’t see anything.

The teacher helped me get out.

I can see goat.

I can see pig.

« Minecraft Club is More than Just Building
Beyond our “Board”ers »