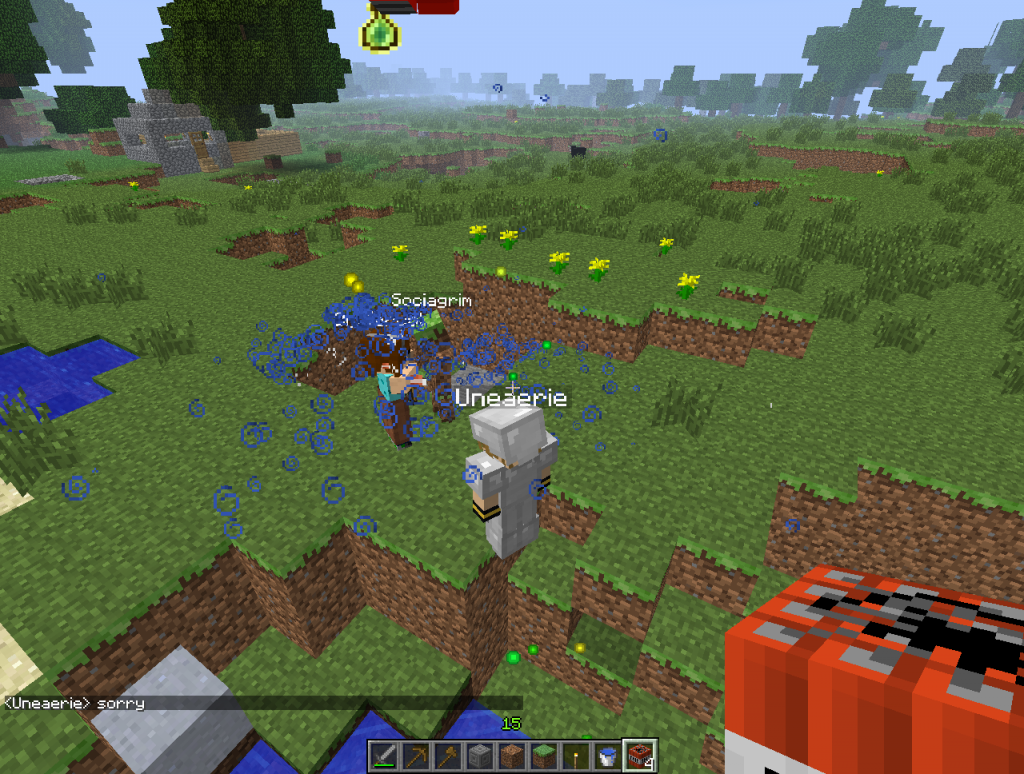 We’ve told and re-told this story many times since it first happened during the 2011-2012 school year. Since it really is a tale told in two voices, this blog post will be co-written by Diana Maliszewski and Denise Colby. (Diana will write in red, Denise in blue.)

Diana: Minecraft Club meetings at my school are usually loud – but this time, during this session, the noise was different. It was the sound of incensed, angry citizens. One of our players was asked by another (from a different school) to share a house together, and then the person from the other school proceeded to break the house and beat on my student. My other students were outraged and planned retribution for this injustice. My original knee-jerk reaction would’ve been to punish the offender immediately, but this person was at a completely different school, nowhere near me.

Denise: Meanwhile during my club meeting, one of my students, who was identified to me as having difficulty with social skills, let me know he was in someone’s house and that they were going to share it with him.  I asked about it and he said he asked to share and the person said yes.  At this point I thought it was good that he was able to find a friend online from another school.  He was happy and didn’t look like he was up to any mischief.

Diana: I talked to the student involved at my school; who it turns out wasn’t keen on sharing the house with a near-stranger in the first place. When I asked why the agreement was made, the answer was “because I didn’t want to say no and be mean”. Did I mention that my player was a Grade 7 girl? For me, warning lights around Intimate Partner Violence (IPV) started to flash in my head. We talked about the differences between being mean and being assertive and trusting your own gut feelings. It’s okay to say no!

Denise: After talking to Diana about what happened on her end, I had to figure out how to follow up on the situation on my end.  I spoke to the student at the next meeting, his story upon further questioning supported what I had been told by Diana.  What was difficult was that he really didn’t see that there was anything wrong with his behaviour.  He wasn’t standoffish, he was just confused.  We reviewed the norms we had established at the beginning of the club. I informed him that what he did broke the norms (no ganking and no griefing) the immediate consequence would be that he would not be allowed to be in the club for a week, and then we would revisit the issue.

Diana: After talking to Denise, the teacher at the other school, about the situation, I was able to calm down the unruly mob at my school ready to seek vengeance on behalf of their victimized classmate. I explained that the offender was indeed facing consequences and that “ganking” the members of the other school would not solve anything. Other than a few strongly worded signs on dwellings and some posturing on the shared wiki, there were no acts of retaliation.

Denise: The week after ‘suspension’ from Minecraft club, he was allowed to rejoin the group.  Excluding him from a group of students that share a common interest with him really wouldn’t help him with building positive relationships with others, nor would it allow me to work with him on establishing positive in-game behaviour.  When he returned I limited his play to single player.  This allowed him time to engage in a common activity, observe how others played, and practice play that could not cause damage to someone or their property.  After 3 weeks he was able to rejoin the multiplayer server.  In that time he was able to connect with another student in the club, and he ended up playing with that student when he returned to the multiplayer server.

Diana: This incident taught me quite a bit, including the lesson that the easy way is not always the learning way. (Yes, we could have tightly regulated interactions between students on our Minecraft server, but how would this teach us to deal with similar social situations in real life?) If this happened on the school yard or between two students at the same school, I would have rushed in as the supervising adult and focused on the aggressor. In doing so, I would have missed the opportunity to address a serious issue in a meaningful way. The other player had no clue that he was attacking a girl, but I was aware and I was, in an odd way, grateful to have this chance to reinforce the message that women should not put the feelings of others ahead of their own safety. Having to wait to find out “the other side” from Denise taught me patience to hear about extenuating circumstances. I wasn’t happy about the episode when it happened, but the clash was a golden opportunity for me to teach and learn.