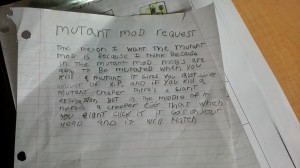 As many of you already know, I run 2 junior/intermediate Minecraft clubs.  But what you might not know is that since I created these clubs I have been the target of a very tenacious group of grade three students.   They did not appreciate their exclusion from the club.  I explained that I only had so many accounts, and that there just wasn’t any room for them.  They grudgingly accepted this, but did not leave it there.  These grade 3 students would make it a point to check in with me almost on a weekly basis to find out the status of the club: did anyone leave?  Do you have more accounts?  When will you get more accounts?  They would also stop me to  discuss mods they had seen on YouTube, and the things they have done on their Xbox accounts, or on their iPads.  The underlying message in all our exchanges was the same: LET US IN!

I was able to get some minecraft accounts in March and started using MinecraftEdu.  I had my class and the existing club to test out the Mulitschool MinecraftEdu server, before opening the club up to the grade 3’s.  Of course they quickly found out about this, and ramped up their campaign to get in.  At first I was able to put them off with:  “We are testing the new server” and “I need to get the new permission forms approved by our principal.”  But that only worked for a couple of weeks before they started asking for a deadline, and showing up at my class during the day to remind me.  At this point I think I should mention that I really wasn’t reluctant to include the grade 3’s, I just had a lot of other things on my plate.  I honestly just didn’t get around to getting the permission forms approved.

I was constantly bombarded by this group of 6-10 students.  Recess duty was when they were guaranteed to strike, approaching me in waves.   They even wrote letters requesting mods be added to the game for when they eventually got access to the club.  Yet, if they hadn’t been so determined and persistent, I might still be dragging my feet.  Imagine what these students could accomplish if they focused their passion for Minecraft on a political or social issue?

But they did not stop once they got into the club.  They were in the club for less than a week before they discovered that they can access the game outside of the club times i.e. during class time.  My grade 4-7 students had been in the club since October and had not figured that out.  I was impressed.  However, I did lay down the law about accessing the game during class time: only with permission from their teacher, and if I get any complaints from teachers about abuse of this privilege, or infractions on our club norms, there would be serious consequences.  They were all quick to comply.  They had fought hard for their access, they would not do anything to jeopardize it.

I think this is the group that will push me to up my knowledge of how Minecraft works.  These persistent, driven grade 3’s might actually be the push that gets me to put ‘learn to code’ higher on my to do list, because I can’t see them being satisfied with just moding the game for a very long time.  If anyone will want to design their own mods, it will be this group.

If at the tender age of 8 or 9 years old  they are able to pursue a goal from October to May, not only persisting, but increasing their focus and changing their strategies to achieve their goal, then they can potentially do anything.