It’s been quiet here on the GamingEdus website, but it doesn’t mean that games-based learning (or games-based fun) has been abandoned. In fact, a tradition continued and it was a wonderful way for virtual friends to reconnect.

The pre-party plans were well documented by the great Gumby Blockhead on his site (http://gumbyblockhead.com/2017/12/6th-annual-the-sign-of-the-times-party/). The celebration itself went relatively smoothly, despite a slow start and some technical difficulties (such as outdated Screenflow software).

Set-up began months ago, and for someone like me who hadn’t been to the area prior to the party, it was impressive. The map of the Rainbow Island Amusement Park made things very clear to newcomers. There were plenty of spaces to pick up virtual snacks and souvenirs. 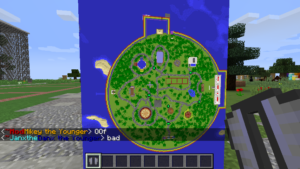 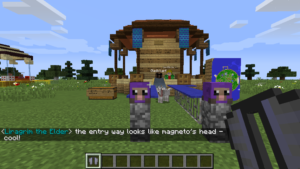 The activities were varied and appealed to all sorts of players. We began with Snowman Hockey (see upper left corner of the collage for a shot of Jack and Phis wearing their hockey uniforms before the match). Build Battle was a thrilling new game. Four contestants were given an allocated spot and were given a theme. Participants then had three minutes to build something related to the topic. One person was eliminated each round until a victor emerged. In the first game, our topics were “a house” (upper row, middle column), “flower” (top right picture), and “squid”. The second game began with “birds” (lower row, middle column) and then “fantasy” and a final topic which I was too busy to capture. The Rainbow Pathway Race featured players on horses galloping along a pretty (but sometimes treacherous) road – there’s me (Liragrim) on my horse in the lower right corner. 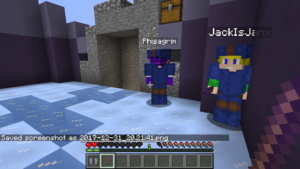 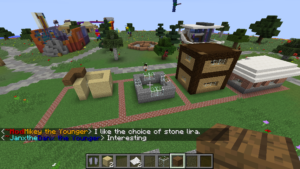 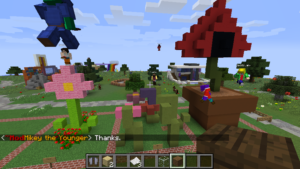 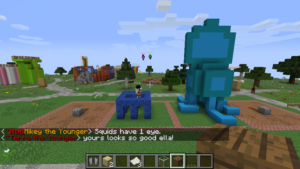 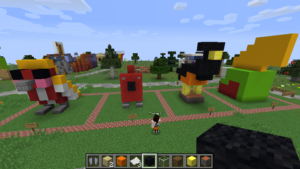 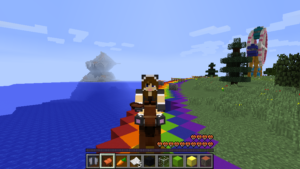 Big thanks to all those who were able to attend and to the individuals and groups that helped build the party location. Special thanks to Gumbycraft, our host server. I’m sure videos of all the hijinks will be posted shortly.

What are you building today at the Library Minecraft Club?