On Sunday afternoon, I sat around shivering in my robe, recovering from a sore throat and bug that left me achy and lethargic, and I asked my own children what I should write about for my upcoming Monday Molly Musings post. My boy was too busy destroying Duke Fisheron on Terraria to answer, but my girl looked up from her own online composing to suggest that I think about something in school this past week that’s been exciting for me. Eureka – the post practically writes itself!

I love learning through play because of all the wonderful tangents it takes and the deep, meaningful, “sticky” learning that occurs across a variety of subjects. Aviva Dunsiger wrote about her Playdough provocations with her primary class and although she had a different end-point with her reflection, for me it was a great example of how the students can embrace and run with a topic.

My students have been asking me constantly about when we’ll begin using Minecraft again, as a club and in school lessons … but this post isn’t about Minecraft. It’s about Bop It. 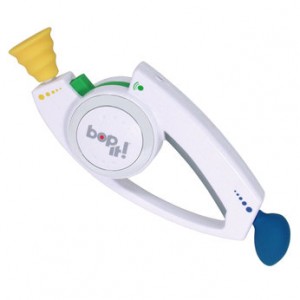 I’m teaching Dance & Drama to the Grade 1-2 classes this year (in addition to Library, Media, and kindie ICT) and I know that I have several shy students in the class. I wanted a fun but non-threatening way to get us to think about types of movement. I was cleaning out the garage this summer and found this toy. Instead of giving it away, I thought I’d give it a try for school. I used it in a games-based learning frame of mind (not in a gamification way – if you aren’t sure about the differences, I Googled this explanation, which is an okay start and avoids my justifiable anti-gamification views) and we played the game the way it was originally invented. We chose the “solo” mode and took turns. (In case you aren’t familiar with the game, the machine calls out tasks and the player must act on the directions in a short period of time, such as “bop it” [which means hitting the white button], “pull it” [which involves yanking the blue bulb at the end], “twist it” [for the yellow object] and “shout it” [for the green input microphone].)

Here’s when, once again, student innovation and engagement takes over any original plans I had for using this game and device.

When the students played Bop It, the intensity of their listening was incredible. It didn’t start that way. There were lots of giggles and gasps at first, but the students themselves discovered that if the group made too much noise, the player couldn’t hear the machine’s instruction, which would lead to a lower score. By the time we played Bop It for a second time, you could hear a pin drop. This group norm was set in place by the students, not me. I was just delighted to see it happen.

The students asked to play Bop It again after the first day of Dance class, so I decided to take notes about who opted to pass, who played, and their scores. I emphasized to the students that I was more concerned about whether or not they participated than their actual scores. Still, many students kept track of their own results, remembering what they got during the prior class, and became eager to improve their scores. When other students obtained a particularly high score, the class would cheer (but not too long – because they didn’t want to distract the next player).

My initial plan was to use Bop It to launch into an exploration of pulling moves, twisting moves, and bopping moves. The students noticed that the first three commands uttered by the Bop It machine are always in the same order (bop-twist-pull) but that the pattern breaks after this. Hello patterning strand in mathematics! Then, as we experimented with our own twist/pull/bop moves, someone said we should put them together to make a movement sequence (a.k.a. a dance) and we did! It turned out so well that we wrote down the choreography (for writing and media), developed a tambourine pattern since we couldn’t use the actual Bop It game for the rhythm (incorporating music and math again) and we are rehearsing the pattern to perform at our September character trait assembly! We’ll be writing letters to our parents to invite them to come see those who choose to go on stage (another writing and media related task).

When some students proclaimed that they wanted to perform their dance sequence at the assembly, I decided to put it to a vote, with majority rules. After having one class vote down the idea of sharing at the assembly, one wise boy asked why it was necessary to have the majority agree – couldn’t they still go on stage even if some students were reluctant? As long as we had more than a handful of participants, it could work. I relented and agreed, and I’ll leave it up to the students to decide whether or not they share in this format.

I look forward to playing more with my students and letting them teach me a thing or two.

« Minecraft, the paper clip and me
Game on with Minecraft workshops »