Minecraft Interest Rises – Good or Not?

Another busy November weekend has passed and an equally intense week is upon me. While I attended the Ontario School Library Association’s Council meeting on Saturday, not one but two of my colleagues approached me to discuss incorporating Minecraft officially into their schools. I came home and found an email from a former teacher-librarian working at another school who attended the Educational Computing Organization of Ontario conference (where Liam O’Donnell, Denise Colby and I gave a talk about “Connecting the Blocks: Linking Minecraft to the Ontario Curriculum“) and wants information on our servers and getting her Grade 7s using it in class. This week, I was supposed to try to schedule a visit to another school to launch their use of Minecraft, but I am going to have to postpone the engagement.

Minecraft is garnering a lot of attention in media and education, and I’m uncertain whether or not it’s a good thing. 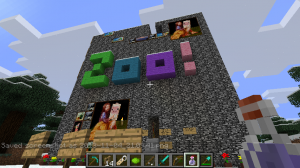 This is the zoo made by the Maliszewski Grims (of their own choice) on the Pro Play server.

The optimist in me loves the idea that schools are becoming more willing to look at media that students feel passionate about and make it a valid topic of conversation in schools. I think it’s wonderful that some educators are considering new ways of engaging students, new ways of knowing and learning and exploring. It makes my heart happy to see students leading the learning experiences, making connections to curriculum, and developing skills and habits that will help them in the future.

The pessimist in me worries that schools will appropriate and manipulate Minecraft and leech the fun out of it for students by organizing overly prescribed methods of use. I think it’s concerning that some educators are unwilling to try the game for themselves and are simply seeking a new fad or a quick-fix for some students. It makes my stomach churn when game culture (and school culture) is misunderstood and disrespected, especially when elements of each are extracted without context to try to improve the other (a.k.a. gamification). 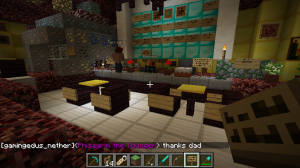 Phisagrim’s Magma Cafe in the Nether – media marketing, economics, and STEM work – on his own.

Here’s the thing I need to remember – this pattern has happened before. (I think I’ve been influenced by the “Disciplinary Thinking” in the new Ontario Ministry of Education revised Social Studies, History and Geography document – ideas like significance, cause and consequence, continuity and change, patterns and trends, interrelationships, perspective. It must have been the OSLA T4L inquiry webinar I was preparing.)

Liam has said this before, although I can’t remember where or when. Video games are in 2013 where comics were a few decades ago. At first, comics were evil, corrupting youth who wasted their time with them, filling their heads with nonsense. Then, a few people dared to bring comics into schools. It changed from odd to cool. More people started doing it. Comics moved from extreme to mainstream. Now, the use of comics in the classroom is common. Comics were used in ways in classes that were boring and counterproductive. People jumped on the comics bandwagon, but despite some questionable implementation by some, comics are still around in education. If Minecraft and other video games have the potential that I believe they do, it can weather the less-than-ideal views and uses.