On January 10, 2014, I had the great opportunity to visit a local school to help a colleague and friend launch Minecraft with her class. I was excited but had a little anxiety in the back of my mind. I’ve been at my own school for a decade, so the students in my classes and my Minecraft Club know me well, and I know them. What would it be like with students that I have no prior relationship with, that I’ve never interacted with before?

It turns out that I had nothing to worry about. The principal escorted me to the classroom. He opened the door and when he entered, I heard a huge groan of disappointment when they saw him. Then I followed him into the classroom and the sad sounds turned into cheers! What a welcome!

It took a few minutes to download and type in the borrowed user accounts so we had a bit of an introduction with the Grade 7 class while technical set-up occurred. We played “That’s Me / That’s Us” to get a sense of the class interests and expertise (most had heard and tried Minecraft before but only two owned Mojang accounts). Before we began playing, I thought it’d be helpful to establish common expectations about in-game conduct but a comment from a student led me to have this conversation in a different way than I initially planned: I asked the groups of students to discuss the similarities and differences between game culture and school culture. The classroom teacher led the follow-up talk and I’m kicking myself for not recording the amazing dialogue. What impressed me was how I could see some students have their original notions challenged and see their opinions morph and change. Several saw games and schools as two very separate entities but by the end of the conversation, they found many more parallels between the two, with regards to collaboration, competition, challenges, courtesy, and more. 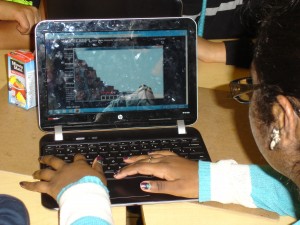 The students spent the majority of the time playing, but there was one other unique aspect to this visit. At one point I looked up and saw eight adults in the room! They were there because they were excited and intrigued about using Minecraft in schools. The principal and vice-principal, the Grade 7 teacher and her grade team partner, one of the special education teacher and two educational assistants and I were all present. They observed, they asked questions of the students, they shared in the curiosity and wonder and excitement. The students took the lead and the adults came along for the ride. Every adult in the room was supportive and delighted to see how engaged all the students were as they explored. Several of the educators expressed interest in exploring for themselves on the GamingEdus Professional Play server. 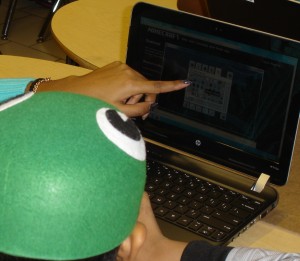 The adults and young people were so extremely appreciative for the visit and assistance. Both groups were equally eager and enthusiastic about all the possibilities Minecraft held for them and their learning. I look forward to seeing their Minecraft path, both literally and figuratively. 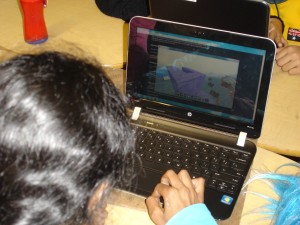 (Thanks to Lisa Teodosio for taking and sharing these photos.) – Diana Maliszewski