I had the pleasure of attending a social with several members of the Association for Media Literacy. As Michelle, our “host with the most” said on social media: “What happens when media educators get together? We play with new media!” Her family recently purchased some virtual reality technology and so we experimented with it. Looking at underwater creatures up close was impressive, but what really got me excited was when they offered to let me try Minecraft with the goggles. 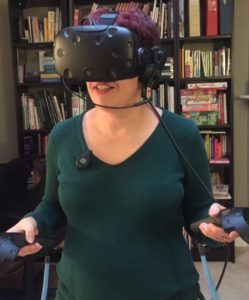 I’ve been playing Minecraft for years but never like this. I interact with Minecraft using a keyboard, mouse and screen. Moving without the WASD keys was a little odd. You can walk a bit, but the sensors in the room indicate how far you can go, so you can’t physically walk as far as you need to – one of the buttons on the hand-held controllers help you leap or teleport to the spot you want. It took me a little while to get used to the different controls. I looked like a n00b when I was breaking blocks instead of placing them but eventually I started to get the hang of it.

In the other VR experience we tried out at Michelle’s house, I felt like I was the center of the universe: things happened around me, for my viewing pleasure. In Minecraft, I was not the most important thing in the environment. Even though the space was pixelated and blocky, it felt more “real” to me than the underwater scenario.

Speaking of underwater, I had a very physical reaction to being in a certain spot, which I suspect was more related to my prior experiences playing Minecraft than it was using the virtual reality headset. As I wandered around the (thankfully creative mode) world that Michelle’s daughters made for me, while avoiding a hole, I fell in water. I could feel my chest tighten inside. It reminded me of the frustration I felt years ago when I first started playing Minecraft, when I was stuck underground for two weeks because I didn’t know how to get out. I wasn’t wet or crowded in, yet I had that same claustrophobic-like, anxious sensation. Thankfully, making the “forward crawl” motion with your hands *does* translate to the same action in the game and I was able to swim out of the water and get onto “dry” land. 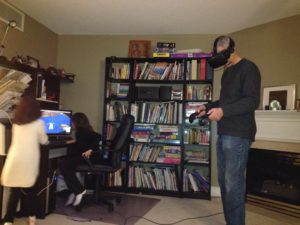 (Neil playing while we watch the screen)

Neil took a turn and he made some keen observations. Neil commented that it felt unusual to see the rain and hear the rain but not feel the rain. How important is it for all the senses to be involved? It’s interesting that Neil mentioned this, as I just came across this article about a virtual reality controller that actually delivers pain (see http://www.konbini.com/us/lifestyle/haptic-vr-controllers-brings-real-pain-virtual-reality/). How willing are we to have “the most authentic experience”? 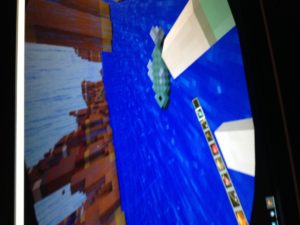 Watching what Neil was experiencing but being unable to interfere or “help” was intriguing. Often, when new players are trying Minecraft, more experienced users are tempted to jump in and “do it for them”. With virtual reality, we could only call out suggestions like “use the trigger button with your left index finger”. I liked that our arms appear as rectangular blocks, and I found that fishing was just as soothing when I actually launched the line of the fishing pole as it was when I hit “F” on my keyboard.

I’m interested in seeing what the Minecraft experience would be like for my son, an expert player. Hopefully, we’ll get a chance to find out in the near future!

Underdog on top or when a C trumps an A