been running for a year and a half as it feels like it’s always been a part of our programming. When we

to computers and finding a suitable space.

us to use but we felt we needed more! I originally had planned on using my own laptop but quickly

had access to computers. So to allow more kids to play we arranged to borrow six laptops from the

Adult Learning Centre (ALC) which is adjacent to the library. Each week I retrieve the laptops from the

ALC; move a table and six chairs beside the desktops; set up the laptops, plug them into the existing hub

and run the updates. This takes approximately an hour and then dismantling takes about 15 minutes as

I usually have a helper.

The other issue was finding a space to play. One option was the boardroom on the main level of the

library; however, would have taken the program away from the Youth Services department and we

wanted it to be in our space so that others could watch, ask questions and get involved with the club.

that the club makes in the open space we use. When I see a tutor setting up for a lesson I remind them

another part of the library. In one of the first sessions a parent of a club member was a little concerned

we set-up (there is a play area for pre-schoolers 20ft away). I spoke to the group about reducing the

volume and the violence in their play and that seemed to help the situation. This has now become one

of the things we discuss in our first meeting of each new club. Most people are genuinely interested in

what we are doing and excited to see so much activity in our library. If there is an available computer I

always invite any spectators to join us even if it’s only for 10 minutes. The only time I had an issue was

with a very young patron who wanted to play but the computers were all busy. He had a bit of a

program. It does have limitations however so we are hoping that at some point in the near future we

will have unlimited access to a collection of laptops that the library owns. Secondly, the Minecraft Club

has lead to more and more children being excited to come to the library. 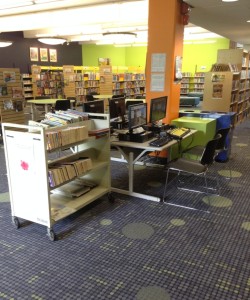 This is the library space with just the four computers and a book sale cart.