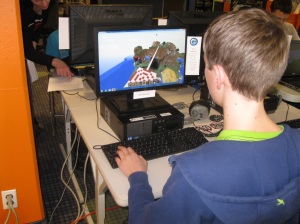 The Owen Sound & North Grey Union Public Library has just wrapped up the last session of Minecraft Club @ the Library for the year.  Since the club began in January there has been close to fifty kids in grades 5-8 join this after school program.   Instead of running a weekly year round club we decided to break the club down into six week sessions.  We were able to fit four sessions into the school year which allowed us to offer the program to more kids.  We often have onlookers at our meetings and if one of the computers is available they are invited to sit in to play.  By having six week sessions with a one hour weekly club date, we found that we didn’t lose too many to other activities.  So far this approach is working and we usually have a waiting list of excited participants for the next session!

Through the summer we enlisted the help of two of the older club members and ran a group for younger kids (grades 1-4) which saw around twenty-five participants. We feel that these numbers are huge for a new program with limited resources!  The Youth Services Department has four public access computers but to run the Minecraft program we borrow six laptops from our neighbours next door at the Adult Learning Centre.  This means we have spots for only nine kids to play each week as I need one to be online with them as a facilitator.   It’s proven to be an exciting venture as the sessions are filling up before they are even advertised!   I’d like to think it’s me they come for but no, it’s definitely Minecraft that has them hooked.

We are fortunate to have the use of the amazing GamingEdus Multi School Server for our club and the ability to build, PVP, fight zombies and BLOW things up to our hearts content for an hour each week.  Two years ago while attending the Ontario Library Association Super Conference I happened to drop by the Minecraft session which the GamingEdus team was presenting.   I was blown away by their enthusiasm and knowledge about the game.  It took a year to get our club up and running after many emails with Liam O’Donnell and sessions on the Professional Play Server as well as consultations with library managers and IT staff.  Read Liam’s article about starting a club in seven steps.  It’s the truth!  It’s a lot of work but so worth the effort!

Many of the kids that joined the club have played before but on a different device, a public server or only in single player mode.  Also, most of the kids that joined I’d never met before and so I was in the dark about how they would play and interact with each other!  Playing in a collective group on the Multi-school server was a totally different experience for them and me. When you can actually talk to the other players because they are sitting next to you brings the game to an entirely different level.  It has been awesome to see friendships develop and self-confidence grow.  During the first meeting the kids are a little wary of each other as usually they’re all from different schools.  But by week 6 it’s full on Minecraft mania and other library users give us that look which says “I thought this was a library, aren’t you supposed to be quiet?”   It’s also great to see kids with different levels of ability build something together and help each other manoeuvre through the game.   That totally cancels out the numerous times I’ve been made invisible, blocked  up inside a building or died because I didn’t see the hole into the void until I fell through it.   Ah yes, the memories.

Starting the Minecraft Club @ the Library has not only introduced me to the gaming side of life it has allowed me to get to know many of our younger patrons that weren’t regular library users.  These kids are an interesting, vibrant group and it’s the best feeling to see them come back to the library in search of books after Minecraft Club has ended.

« Tuesday Evening Play ‘n’ Learn Events
Why Do We Talk So Much About Minecraft? »