Why I cannot wait to bring my Kano to school

[This post originally appeared on my blog, feedingchange, but you missed it. It’s okay, I’m not offended. We’re all busy.]

Around the world, young computer makers are rejoicing. Kano has arrived.

While I am definitely not young, I am right there geeking out with the kids. My own Kano kit arrived last week and I’ve been having a blast making music, designing new versions of Pong and hacking Minecraft into a big, blocky lava-covered mess.

What is a Kano? And does it hurt? 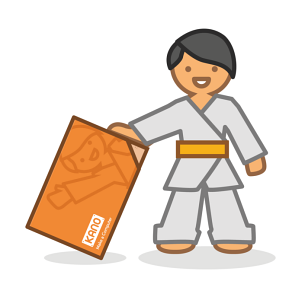 To bring you up to speed, the Kano is a computer you build yourself.

Kano is basically a Raspberry Pi computer pre-loaded with a kid-friendly operating system and lots of other fun stuff. The project was one of those wildly successful Kickstarter deals from last year. I loved what I saw and backed them right away. In return, I’m among the first to get my very own Kano and I can’t wait to show it to my students.

Building a computer is fun!

The team at Kano have said their project was inspired by the creative powers of Lego and they got that right. The box and packaging are simply beautiful:

Solid, colourful and easy-to-follow, everything from the box it came in to the instruction booklets made the set up a simple and fun process.

Here’s what you see when you open the box:

Diving into the box reveals an array of colourful cables, cases and totally cool Raspberry Pi computer. Added to that, there are two instruction booklets and stickers. STICKERS!

The first step is assembling the computer, which is as easy as snapping together the plastic case for the pi:

Then, you attach a few cables to the USB ports. In a few minutes, I had my computer built:

And it was ready to power it up!

That’s when the fun really begins.

Snapping together a computer in minutes is definitely very cool. For me, I was really excited by the code that runs the Kano. I’ve wanted to explore Raspberry pi’s since they first came out but have held off because of the Linux learning curve (which I also want to learn, but my plate is only so big.)

Kano solves this with their bright, friendly, point and click operating system: 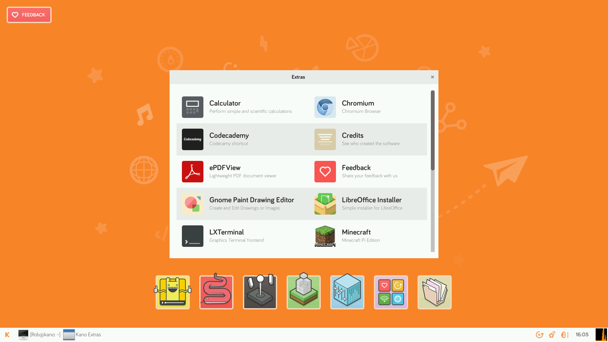 Navigating the Kano will be familiar to anyone who has ever used a computer. That’s nice and all, but here’s where things get interesting.

With this familiar map for kids (and noobs like me) at their fingertips, exploring this computer is a quick and fun trip. Added to this, is the fact that you just built the thing yourself a few seconds ago. That is a pretty empowering experience when most tech comes shrink-wrapped and locked down in warranty-voiding warnings not to tinker. The Kano OS invites you to tinker and hack and explore.

It comes loaded with “Make” versions of some fun (but simple) games: Snake, Pong and Minecraft (okay, that one is not so simple.) Make Pong, Make Snake and Make Minecraft let you play the games but also invite you to lift the hood and tweak the code running the game using a Scratch-like drag n’ drop coding interface. 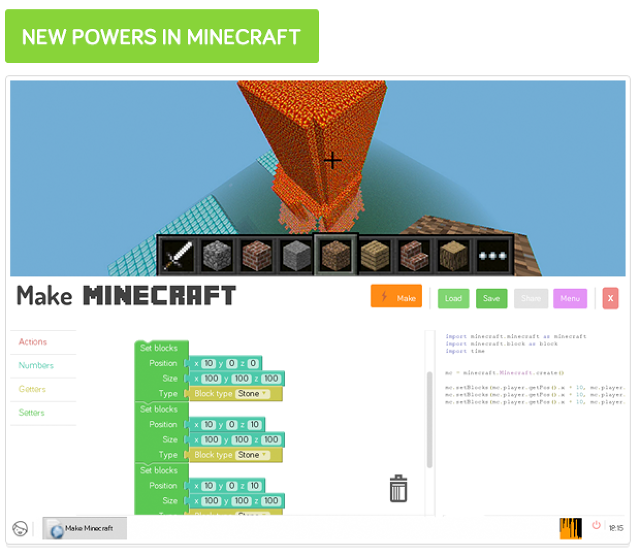 It’s easy to think today’s modern kids fed on bleeding-edge Xbox graphics will yawn at a simple game of Snake or Pong. This review in the Guardian proves otherwise. The ability to for kids alter a game’s code has potential for hours of play, learning and forming of a hacker mindset (all good things.)

For me, the OS is truly special because it can be installed on a regular non-Kano Raspberry Pi. I haven’t tried it yet, but it’s on my To Do list for sure.

I’ve had my Kano for a week now and played with it every night after work and I am only scratching the surface of what it has to offer. I have yet to explore many of the downloadable apps from Coding Academy, Scratch and more. And that is kind of awesome, too.

While Kano is proving very popular with families around the world, they are also very keen to get them into schools and as I said, I cannot wait to bring mine into my school. I definitely plan to bring it into my Minecraft clubs where I have a few veteran Minecrafters ready to dive into coding to unleash their blocky powers.

Watch for posts about that in the coming weeks right here and over at our GamingEdus.org site, where we’ll be talking a lot about the Kano in the months to come.

What do you think of the Kano? Would you use it with a young programmer in your life? Let me know in the comments below.