Age is just a number

During summer school (July 2014 to be exact), my Grade 3 students interacted with Denise Colby’s Grade 6-7 students on the Ryerson University sponsored multi-school Minecraft server. Both classes were working on separate projects at the time but we still greeted each other in-game and eventually started talking with each other online. When the students learned that we would be meeting the people behind the screen, they were excited – and nervous. My students were a bit apprehensive. What were they going to say and do to these strangers who were so much bigger and older than they were? The answer, of course, was the same thing they had been doing before – playing together.

These were a couple of my favourite photos of screen action from summer school, taken the day after our “IRL” visit with our “Minecraft buddies”: 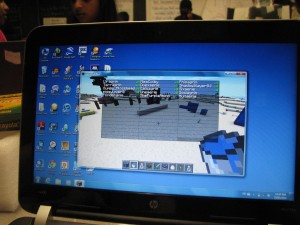 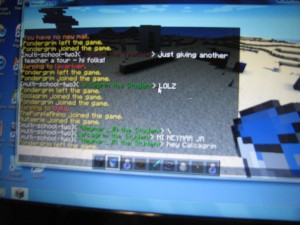 I challenge you to identify which users were the Grade 3s, Grade 6-7s, or even the teachers. It didn’t matter that they were older players or younger players – they were just players.

Something similar happens quite regularly on the Professional Play server. One of the Minecrafters that my son loves to work with is Gumby Blockhead. Gumby’s alter-ego is Andrew Forgrave – an awesome educator. He and my son together have created an in-game cooking show in the Survival Area and one day, my pre-teen took me for a tour of their studio. 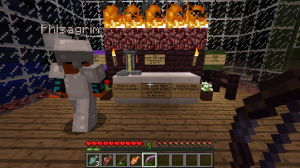 Gumby has always treated Phisagrim as an equal. Although our Professional Play server does have designations to help our moderators know the age range of our players, Gumby never lets that stand in the way of a good plan or build. He would never dream of ignoring a fellow player based on their age. For Gumby, and for many of the people playing on our servers, age is just a number.