During Ontario’s spring break period for elementary and secondary students, I participated in two interviews by research students investigating the use of Minecraft in the classroom. University researchers are fascinated with what educators are doing with Minecraft in the classroom, but their investigations do not yet delve into how educators are using Minecraft exactly, and there are many different tactics and schools of thought. I’d like to suggest an alternative to the highly-structured, teacher-centric approach recommended on some blogs and support this different style with six different anecdotes. It’s very tempting for some educators to direct all actions students take in Minecraft (e.g. by stating the learning objective at the beginning, limiting open play, and providing students with specific expectations) but I like to say that in Minecraft, “the easy way is not the learning way”. Learning is messy but can be deep when you don’t over-structure it.

My Minecraft Club was so popular this year that I had to divide it into three different groups and times (Grade 7-8s from October – December, Grade 5-6s from January – March, Grade 3-4s from April – June). My Grade 5-6 participants have a great time planning, playing, and reporting. Their reports a few weeks ago (and an email by our alert server administrator) notified me that during the club, the lava waterfall I saw was unfortunately created on top of the PvP arena, destroying a large chunk of the communal building. I wasn’t very happy to learn about this and so the next time the club members and I met, before we played, we had a discussion about what happened and what our next steps would be. My Minecraft club members are quite proficient and knowledgeable about the game, and as we talked, someone said “Why didn’t you just use World Guard on it beforehand?” (For those unfamiliar, World Guard is a plug-in you can use to prevent players from breaking or destroying buildings in the game.) 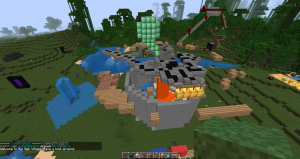 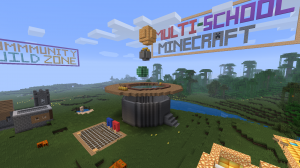 “That’s a great idea, but a poor solution.” I replied. I went on to explain that by protecting buildings with this tool (which we have, in addition to the Residence protection plug-in), it does not teach players to respect the builds that others create. It just means that players can smash whatever they want and it’s the teacher or server admin’s responsibility to guard these projects or make them tamper-proof. How do we learn to care for other people’s property if everything is bubble-wrapped or shielded? Is this true in the real world – does every structure need to be supervised and safe guarded from thoughtless acts of vandalism? If we do not see how we as individuals can make a positive change or stop negative events, even when we are not directly responsible, instead of relying on “the authorities” to step in, then there is a problem. (This applies to bullying as well – bystanders are pivotal people that can, if they take action, more effectively end harassment than punishment by administration can do.)

As part of our “reconciliation”, our players had to describe what they could do differently next time or in the future. These are some of their unedited responses:

From now on when i see someone wreck another creation i will tell them to stop and remind them of what happened to the pvp zone. I will also warn them of the possible things that could happen. I will also remind them that they could take down the server so we wouldn’t have minecraft club. I am also sorry for spawning blazes i spawned them in lava but they escaped.

To prevent this in the future, we can help clean up things that are bad. We can also tell Liragrim or Praxismaxis. I could also bucket up the lava if that happens again.